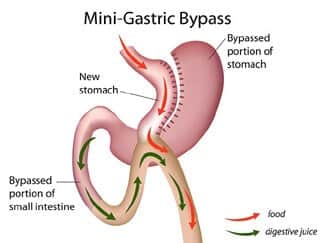 Gastrointestinal weight loss surgery, particularly gastric bypass surgery, is a very effective long-term treatment for weight gain and obesity. According to studies, patients lose an average of 60% – 75% of excess weight after the operation. They also manage to maintain more than 50% excess body weight loss for not less than 15 years.

Mini gastric bypass surgery is one of the latest procedures in the field. Let’s look at what it is, who qualifies for it, and how much weight you should expect to lose after the procedure.

What is Mini Gastric Bypass Surgery?

During mini gastric bypass surgery, the surgeon makes the patient’s stomach smaller by dividing it into two unequal portions using surgical staples. The smaller portion takes about 25% of the original size and is connected to the rest of the digestive tract. The remaining bigger portion stays unutilized.

Since the operation combines restriction with malabsorption, it provides better weight loss and quality of life.

Who Qualifies for a Mini Gastric Bypass?

· Have a BMI greater than 35 with obesity-related comorbidities

Patients with lower BMI but chronic obesity-related illnesses may also be candidates.

How Does a Mini Gastric Bypass Work?

Through restriction, the patient’s stomach is made smaller. Thus, they can’t eat as much as before the surgery. They also feel fuller quicker and longer.

The malabsorptive technique works through the rerouting of the small intestine. The digested food doesn’t stay in the tract for long, thus inhibiting the body from extracting all nutrients and calories from the food before it becomes waste.

By inhibiting how much you’re eating and how much calories your body can absorb, the procedure helps you lose significant weight.

How is a Mini Gastric Bypass Surgery Performed?

Mini gastric bypass surgery is performed using a laparoscope under general anesthesia. The surgeon uses five incisions made on the abdomen to perform the procedure. These incisions act as access points to insert the special surgical instruments.

Using these instruments, the surgeon staples the top portion of the stomach together, separating the stomach into two sections. The smaller section is shaped into a tube, becoming the new stomach for the patient. The remainder of the stomach is left separate.

The surgeon reroutes a portion of the small intestine and part of the bowel, connecting it to the new stomach. Unlike gastric bypass surgery, where the remaining larger stomach is removed, the surgeon, in this case, leaves it despite no longer being involved in the digestive process.

What is the Expected Weight Loss?

Within 12 to 24 months of mini gastric bypass surgery, you can lose anywhere between 30% to 40% of your total body weight. This translates to about 70% excess body weight over a 12 to 18-month period.

· It has a strong, positive effect on diabetes. Patients have an almost immediate reduction in their need for diabetes medication due to the hormonal changes influenced by the procedure. Some eventually get off their medication

· It doesn’t require ongoing adjustments like gastric banding. However, you still need occasional follow-ups to ensure the weight loss rate is appropriate and your diet is nutritionally adequate.

· It best suits people who prefer high fat or high sugar foods. Dumping syndrome is a common side effect of gastric bypass and is caused by the indigestion of high fat and high sugar foods. Its symptoms include diarrhea and stomach cramps.

· Malnutrition – You’re at a higher risk of malnutrition due to the reduced absorption of nutrients and vitamins. You have to be prescribed life-long mineral and vitamin supplements.

Get the Advice of a Qualified Bariatric Surgeon

You can know if mini gastric bypass surgery is right for you by contacting a qualified bariatric surgeon today.

Ready for Mini Gastric Bypass in Mexico? Learn more about this great bariatric option from our highly educated bariatric coordinators. Weight Loss Surgery in Tijuana is a viable option for those who lack insurance or who don’t have the cash to self-pay in the US.

The mechanism of weight loss after the mini gastric bypass is similar to that of Roux-en-Y gastric bypass. The stomach pouch accommodates the only small quantity of food leading to calorie restriction. The food avoids 6-7 feet of the small intestine where most of the absorption takes place resulting in malabsorption.

Indications for MGB surgery are similar to that of Roux-en-Y gastric bypass (RYGB) surgery. A patient with a body-mass index (BMI) >40 kg/m or BMI >35 kg/m with one or more obesity associated disease condition is eligible for MGB surgery. It can also be done for obese individuals who have failed to achieve significant weight loss with non-surgical methods.

Many studies have shown that MGB has similar efficacy with RYGB in terms of weight loss and resolution of comorbid conditions while others revealed that MBG is more efficient than RYGB. This is in addition to other benefits such as: reduce the time of surgery, shorter learning curve, and lesser major complications.

This finding is also similar to that of Lee et al. where the percentage excess weight loss was greater in MGB group than in RYGB group one year post-surgery 64.9% vs. 58.7%. However, not much difference was observed 2 years post-surgery.

Remission of type 2 diabetes mellitus was also better in patients who had MGB surgery as compared to RYGB and gastric sleeve surgeries.

In conclusion, mini gastric bypass surgery is an effective bariatric surgery combining both restrictive and malabsorptive mechanisms to induce weight loss. Though there has been a growing concern among few surgeons on the risk of gastric and esophageal cancer following this procedure, this has not been supported by any tangible evidence.

Ready for Mini Gastric Bypass in Mexico? Learn more about this great bariatric option from our highly educated bariatric coordinators.