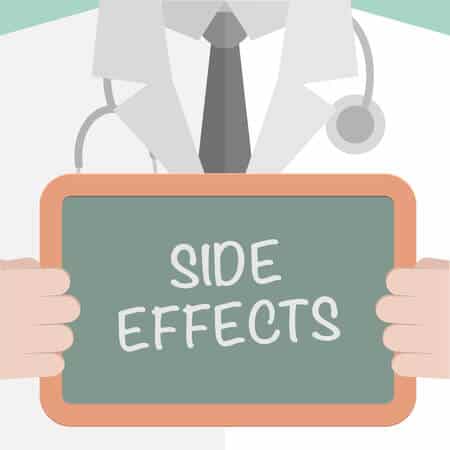 Gastric sleeve surgery is considered one of the safest and most effective procedures for individuals struggling with obesity. While it typically results in fewer complications than other bariatric procedures, it can still cause side effects. If you’re considering a sleeve gastrectomy or you’ve already had one and you’re wondering what to look out for, this article will help you to be prepared. Here are some of the possible side effects.

A gastric sleeve leak or fistula is the most serious complication that can develop after surgery. It occurs when a hole or seam develops between the staples in the new stomach sleeve. This can cause digestive fluids to leak from the stomach into the abdominal cavity. In some cases, an abscess develops next to the sleeve.

Individuals who have a gastric sleeve leak may develop:

Bleeding occurs following 1.16% to 4.94% of sleeve gastrectomies and it usually happens along the staple line. However, bleeding can also be due to damage to the spleen and liver or problems with coagulation. Bleeding from the staple line is typically the cause of gastrointestinal hemorrhage. Post-operative bleeding can be prevented by maintaining blood pressure at 140 to 150 mm Hg in the final stage of surgery and reinforcing the staple line with sutures.

Early signs of dumping syndrome occur within 30 minutes of eating and they include:

Meanwhile, late signs may appear one to two hours after a meal. Since the body rapidly absorbs sugar, there’s a large spike of insulin in the bloodstream that leads to hypoglycemia (a drop in blood sugar). Signs of hypoglycemia include: 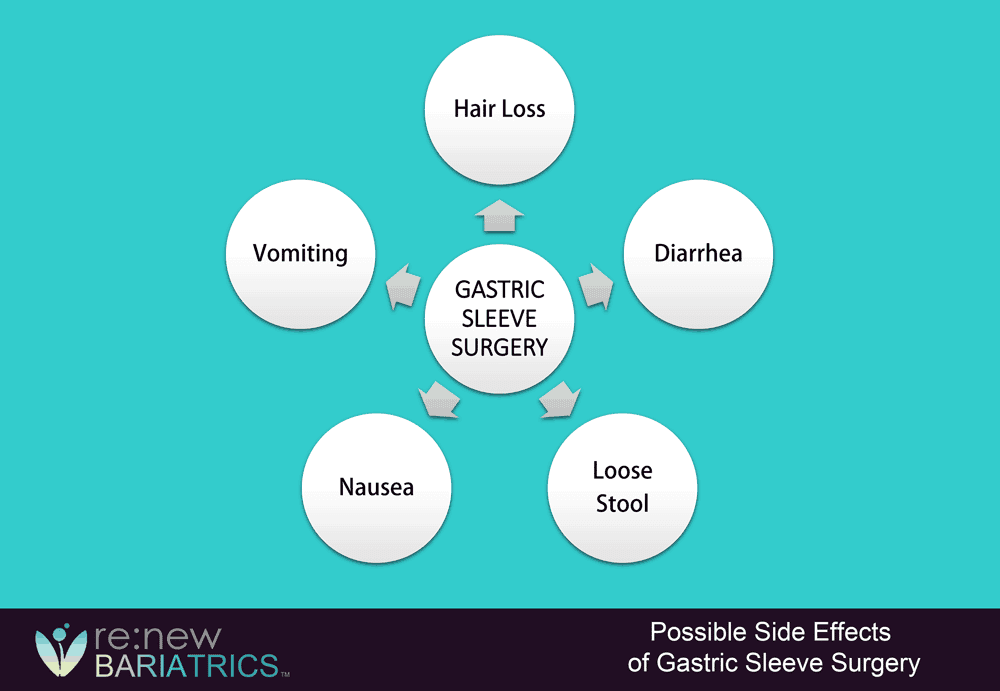 People who undergo sleeve gastrectomy procedures can develop GERD. Since the stomach becomes smaller and less compliant, pressure builds up inside. At the same time, the lower esophageal sphincter gets weaker. This can lead to the reflux of acidic stomach contents into the esophagus.

Stenard and Iannelli analyzed 13 studies on GERD and gastric sleeve surgery. The average BMI of the patients was 42kg/m(2) and the average follow-up period was 29 months. One of the studies showed that up to 84% of patients had symptoms of GERD.

Another piece of research showed that symptoms of GERD were more common in patients that had gastric sleeve procedures than those who had Roux-en-Y gastric bypass. GERD occurred in around 2.1 to 21% of sleeve gastrectomy patients who didn’t have evidence of the disease prior to surgery. When hiatal hernia repair was carried out along with the gastric sleeve procedure, the incidence of postoperative GERD symptoms reduced.

The researchers also reviewed another 12 studies involving 1,863 patients. Among this group, the average BMI was 51kg/m(2) and the average follow-up period was 20 months. All the individuals involved experienced symptoms of GERD prior to surgery.

In one study, symptoms were resolved in 94% of cases. In another, improvement was only reported in 41% of cases. In some of these studies, there was no significant difference in symptoms between those who had a hiatal hernia repair along with their sleeve gastrectomy and those who did not.

This indicates that the effect of gastric sleeve surgery on pre-existing GERD and the role of the procedure in the development of GERD varies from one person or surgeon to the other.

Nausea can be a natural occurrence after surgery. It can also occur when gastric sleeve patients eat too much, eat too fast, drink while eating, or don’t chew their food well enough. Once individuals get used to their new eating habits, nausea should diminish. Eating more slowly and refraining from eating while drinking can help to reduce discomfort.

Meanwhile, vomiting may occur either because of nausea or eating unfamiliar foods. If this happens, returning to a liquid-only diet for a day can be helpful. However, frequent vomiting could indicate a serious problem and you should contact your doctor immediately.

Diarrhea and loose stools are also common following gastric sleeve surgery. This is because the diet immediately post-op is mostly liquid. However, the problem usually goes away as patients eat more solid foods.

There are several reasons why back pain can occur after gastric sleeve surgery. Obesity puts a lot of strain on the back. Surgery reduces that strain but the back muscles continue to be under tension so pain can occur. Also, it can take time for the spine to re-align after significant weight loss.

Another possibility is that bariatric surgery results in the loss of the fat that cushioned the spine. This increases mobility around the spine and degenerative changes in the vertebrae or discs can become symptomatic.

Increased physical activity and inappropriate forms of exercise can also lead to pain, as can low levels of calcium and vitamin D.

Abdominal pain can be a sign that complications have developed. Gastric sleeve surgery is often performed laparoscopically with multiple small incisions made in the abdomen. When the patient recovers from anesthesia, they may experience pain at these incision sites.

This is typically treated with opioid painkillers but by the third day, most individuals need  less potent pain medication. If severe pain continues after day three, it could be due to an infection, abscess, or gastric sleeve leak.

According to the American Academy of Dermatology Association, it’s normal for people to shed between 50 and 100 hairs per day. However, people who lose weight rapidly can lose more hair. As they reach their goal weight, the hair loss tends to reduce. This side effect isn’t typically too concerning unless malnutrition is a contributing factor. However, it can result in impact self-esteem, mental health, and quality of life.

One meta-analysis found that the incidence of hair loss after metabolic and bariatric surgery was 57% but it decreased as time went on. This meta-analysis included 18 studies and 2, 538 patients. Hair loss was more common among younger women and it was linked to low levels of serum zinc, folic acid, and ferritin levels.

This side effect is more likely to occur following gastric bypass but on rare occasions, it can happen after sleeve gastrectomy. Bad breath may be due to dehydration since many patients reduce their fluid intake after surgery. It’s best to drink at least 64 ounces of water per day, using small quantities at a time.

It can also result from the stasis of food in the stomach. If food can’t move from the stomach to the small intestine, acidic contents can be regurgitated into the esophagus and possibly the mouth. This can be prevented by following your dietary plan and taking antacids for GERD.

Ketosis is another reason why bad breath can occur. After surgery, your diet will be protein-heavy and low in carbohydrates. As the body seeks to rebalance itself, it will burn fat for energy.

This is known as ketosis and it increases the levels of beta-hydroxybutyrate, acetoacetate, and acetone in the body. The excess ketones are excreted via the urine and breath, leading to a fruity or metallic smell.

The Bottom Line on Gastric Sleeve Side Effects

Every surgical procedure carries the risk of side effects. However, complications of sleeve gastrectomy aren’t typically serious or life-threatening. It remains one of the most effective solutions for individuals with obesity and compared to other weight-loss surgeries, it is associated with the least post-op problems.

Still, it’s important to be aways of the potential side effects. If you’d like to know more about the benefits and risks associated with gastric sleeve surgery, contact the Renew Bariatrics team.