The pandemic has cast a spotlight on existing health care disparities in the United States. As COVID-19 spread across the country in 2020, big-city hospitals scrambled for resources, and rural areas and communities of color suffered, further showing that many American cities lack basic health care access. For adults having obesity, contracting COVID-19 is much more likely to lead to hospitalization, putting even greater importance on equal access to health care.

To gain a more comprehensive view of health care access across the United States, we used the Centers for Disease Control and Prevention’s (CDC) Behavioral Risk Factor Surveillance System (BRFSS) data. Our findings show what constitutes health care access (or lack thereof), the states better and worse off, which communities have the most need, and how access to healthcare may affect physical and mental health.

When looking at access, we consider three things: whether Americans have a personal health care provider, if they avoid seeing a doctor due to cost, and whether they have health care coverage. We found that one-third of people reported at least one of these poor access indicators. 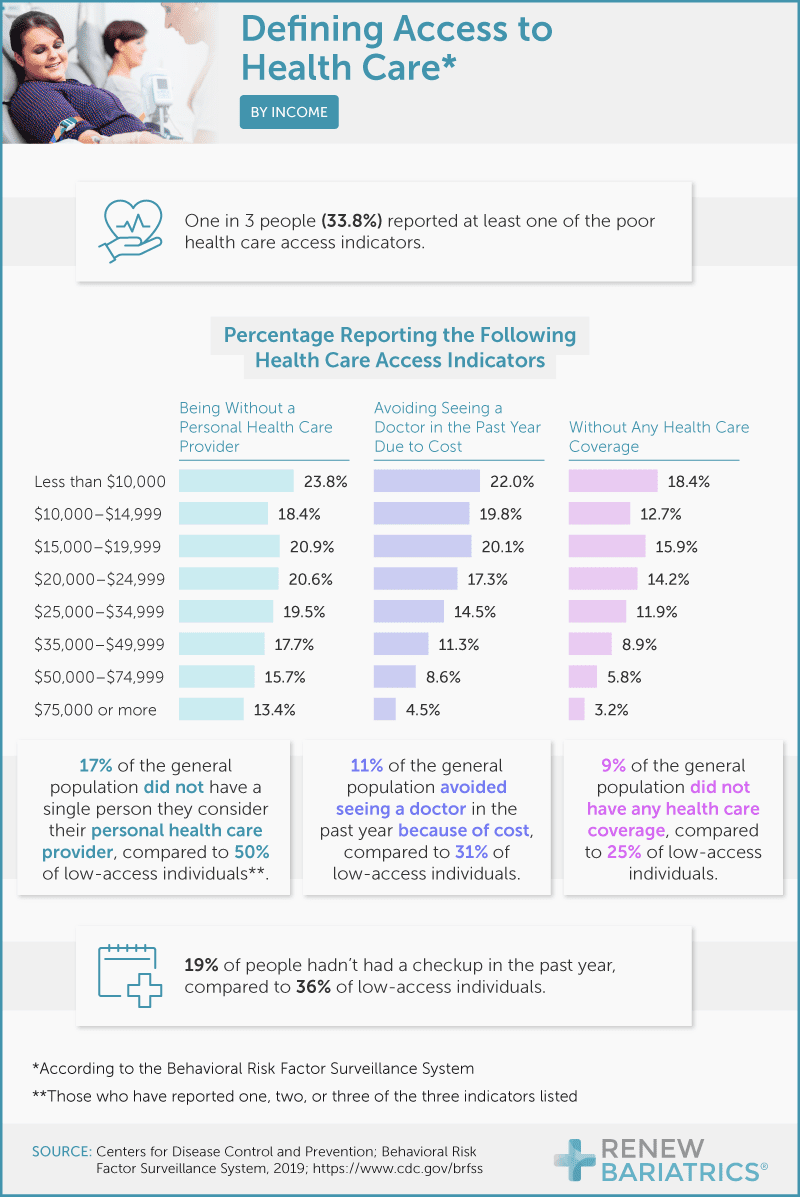 Further evaluation revealed that 17% of all respondents did not have a personal health care provider, which may pose a problem because Americans receive most of their care through a primary provider – per our system’s design. Following no access to a personal provider, 11% of people reported that they avoided a doctor in the last year because of cost. Lastly, 9% said they did not have health care coverage at all.

Although the general lack of access to these three primary needs may be alarming, the data gets more grim once we hone in on the low-access population (those with at least one low-access indicator). Of this group, half did not have a personal health care provider, indicating that some of America’s most vulnerable are not having their basic health and wellness needs met. Thirty-one percent of the low-access population avoided a doctor due to cost, and 25% reported not having any health care coverage, emphasizing how problems can be compounded for those already struggling.

The data reveals that some U.S. states fare better than others. Of the general population surveyed, Texas scored the worst in two health care access categories: 16% of Texans avoided the doctor due to cost, and less than 17% had health care coverage. People living in Nevada were the most likely to not have a personal health care provider, as over 28% of the population revealed that need. 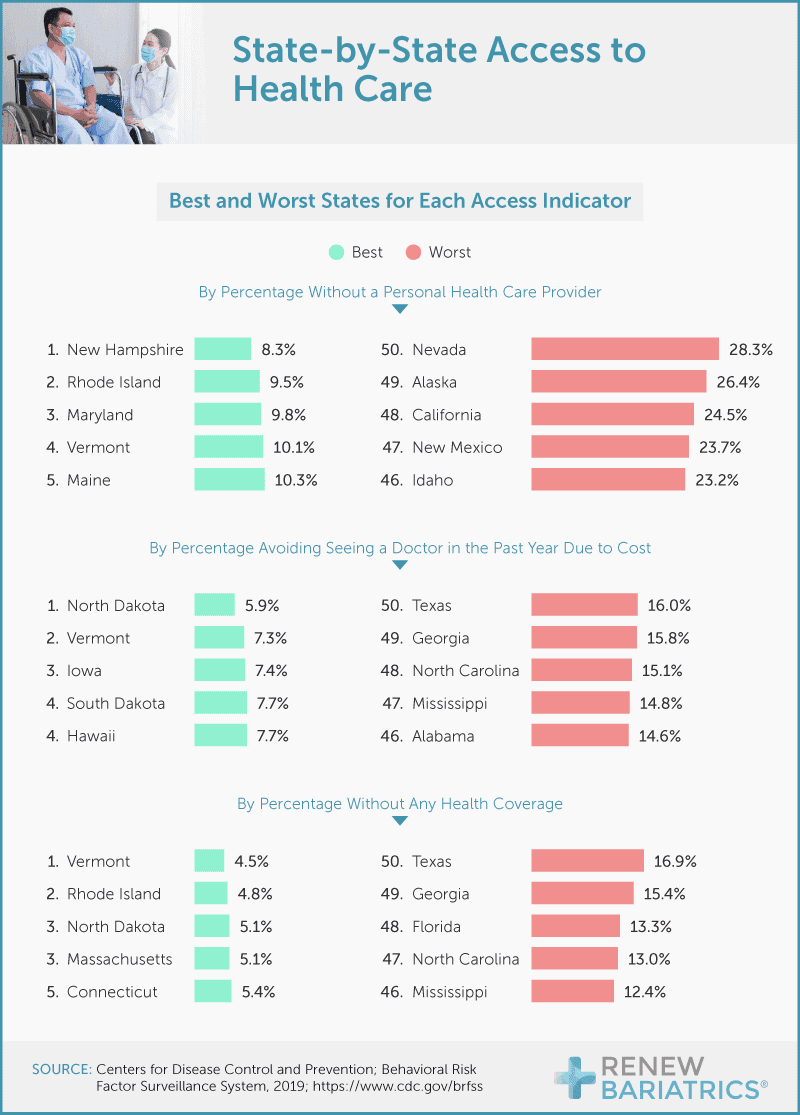 Though much of Vermont is rural and research suggests that rural communities tend to have less access, the Green Mountain State made all three lists of the states rated best for health care access. Perhaps Texas and Nevada could benefit from a study of Vermont’s health care system. 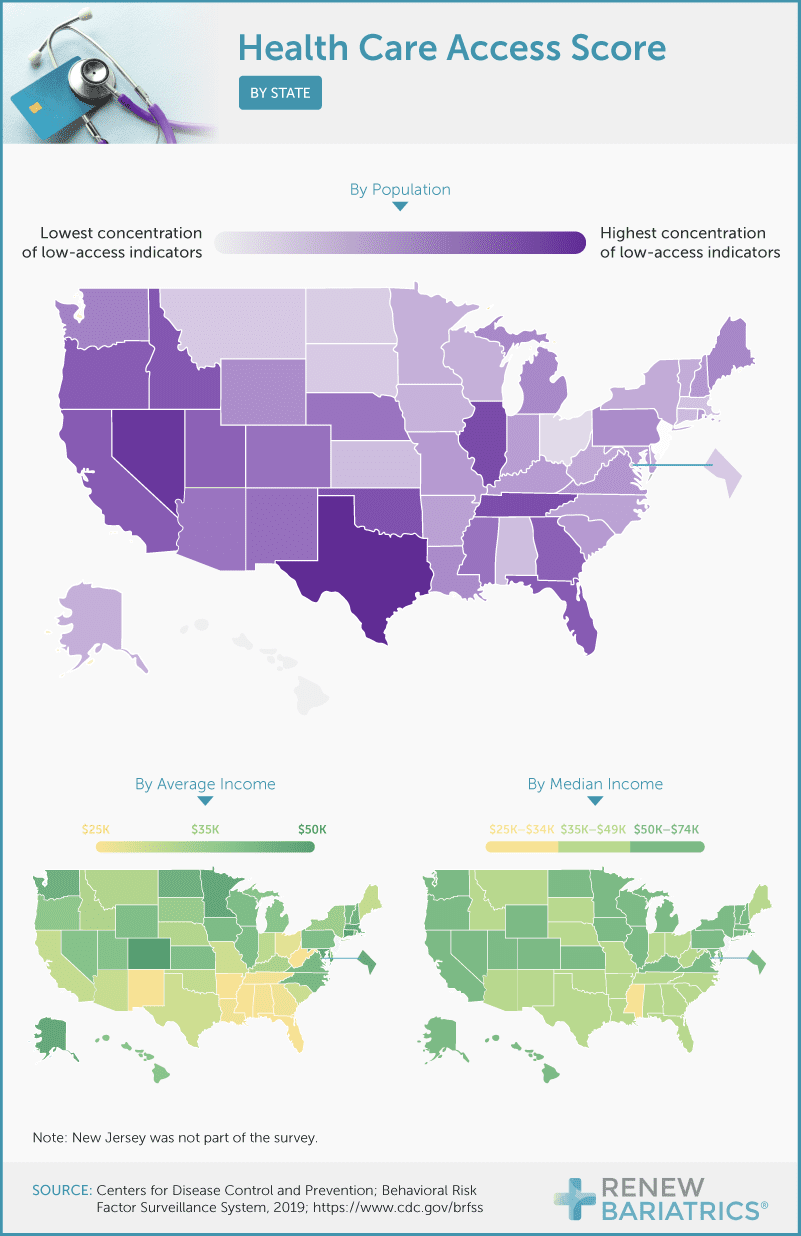 Comparing the low-access map to maps of average and median income shows that many low-access indicators could potentially be linked to poverty. Because 58% of health coverage is employer-based and minimum-wage workers are less likely to accept health insurance due to the high cost, it is likely that states with a lower average and median income will have more barriers to health care access. This holds true for states like Texas, but not Nevada, where a rapidly growing population is outpacing available physicians.

People of color have had trouble gaining access to quality health care in the United States for decades, from facing bias by health care providers to the refusal of several states to expand Medicaid – including some of those with the largest concentrations of Black Americans.

Our findings affirm this reality, highlighting that people who identified as Hispanic are left out of the health care system more than any other race. Of all people surveyed, 33% of Hispanics said they did not have a personal care provider. They were also more likely to go without health care coverage (25%) and to avoid a doctor due to cost (20%). White people were the least likely to report multiple low health care access indicators.

For adults with a high BMI, becoming infected with COVID-19 may triple the risk of hospitalization, compounding the dangers low access to health care pose to these individuals. Low access to health care has other direct effects, such as not being able to get to a specialist or not having a nearby hospital, and invisible impacts as well.

Research shows that many Americans have recently reported symptoms of anxiety and depression, likely due to the pandemic. Our findings show that 43% of low-access Americans reported at least one poor mental health day in the past month. Only 36% of the general population surveyed said the same.

A Covered America Is a Healthy America

Access to health care – especially high-quality care – is critical for disease prevention and a better quality of life. A complete look at the state of health care access in the U.S. shows discrepancies by region, race, and income. To move toward a more holistically healthy country, many Americans need access to a primary provider and health care coverage at a low cost.

If you are ready to start living a healthier life at an affordable price, visit RenewBariatrics.com. Our team of medical professionals follows rigorous standards and will give you the highest quality surgical experience at an all-inclusive price.

We collected data from the Centers for Disease Control and Prevention’s Behavioral Risk Factor Surveillance System (BRFSS) 2019 report, available at https://www.cdc.gov/brfss. The BRFSS is the nation’s premier system of health-related telephone surveys that collect state data about U.S. residents regarding their health-related risk behaviors, chronic health conditions, and use of preventive services.

Data were unweighted for most analyses but normalized by population for state-level comparisons. No statistical testing was performed, so the claims listed above are based on means alone. As such, this content is purely exploratory, and future research should approach the topic in a more rigorous way.

We want you to be empowered with accurate and timely information about health care access, so please review and share our research and digital assets for noncommercial use. All we ask is that you link back to this page where our complete findings, methodology, and limitations are available.