The Stomach and Its Role in Digestion 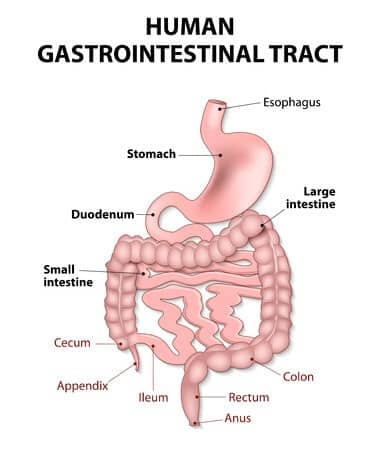 The stomach has a J shape in most individuals. However, the shape may be influenced by whether it is full or empty. It can be divided into different parts namely the fundus, cardia, body, pyloric antrum and the pylorus.

The stomach plays a significant role in digestion. While it serves as a temporary reservoir of foods, it also participates in the control of appetite, digestion and absorption of food. These functions are the bases of some of the restrictive surgeries for obesity.

The stomach serves as a temporary reservoir of food. The duration of stay depends on the type of food. Solid foods stay longer than liquid foods and clear fluids spend the least duration in the stomach. However, the duration can be altered by many factors. While in the stomach, the food continues to undergo mechanical digestion which began in the mouth by chewing. It is churned and mixed with acids and digestive juices by the peristaltic movements.
These movements are caused by the contraction and relaxation of the smooth muscles in the muscular layer of the wall of the stomach. After appropriate mixing, the stomach releases the food into the small intestine in piecemeal.

The stomach produces hormone ghrelin when it is empty while the production seizes when the stomach is full. Although this hormone has other functions outside the digestive system, it is majorly a hunger stimulating hormone due to its action on the hypothalamus in the brain. It also causes increase peristalsis and production of acid, thus preparing the stomach for incoming food.

The stomach is the site where chewed and partially digested food from the mouth is further broken down into simpler and smaller pieces that allows for further digestion by the pancreatic and intestinal enzymes when the food gets to the small intestine. The pepsinogen produced in the stomach by the chief cells is activated by the stomach acids into pepsin. Pepsin then acts on the protein component of the food and converts it to smaller components known as peptides. Carbohydrate digestion usually starts in the mouth when an enzyme known as ptyalin (an amylase enzyme present in saliva) acts on it. This converts starch to oligosaccharides and disaccharides. In the stomach, the partially digested carbohydrate is not acted upon by any enzyme.

In humans, absorption of nutrients and some water is majorly a function of the small intestine while the large intestine absorbs water only. Nevertheless, the stomach is also capable of little absorption. These include: amino acids, ethanol from alcohol, and caffeine. Others include drugs such as aspirin. In a dehydrated state, the stomach is also capable of absorbing water. The intrinsic factor produced by the parietal cells aid the absorption of vitamin B12 in the terminal part of the small intestine.

In conclusion, the stomach is an essential organ of digestion. It performs both mechanical and chemical digestion and serves as temporary reservoir for the ingested food.