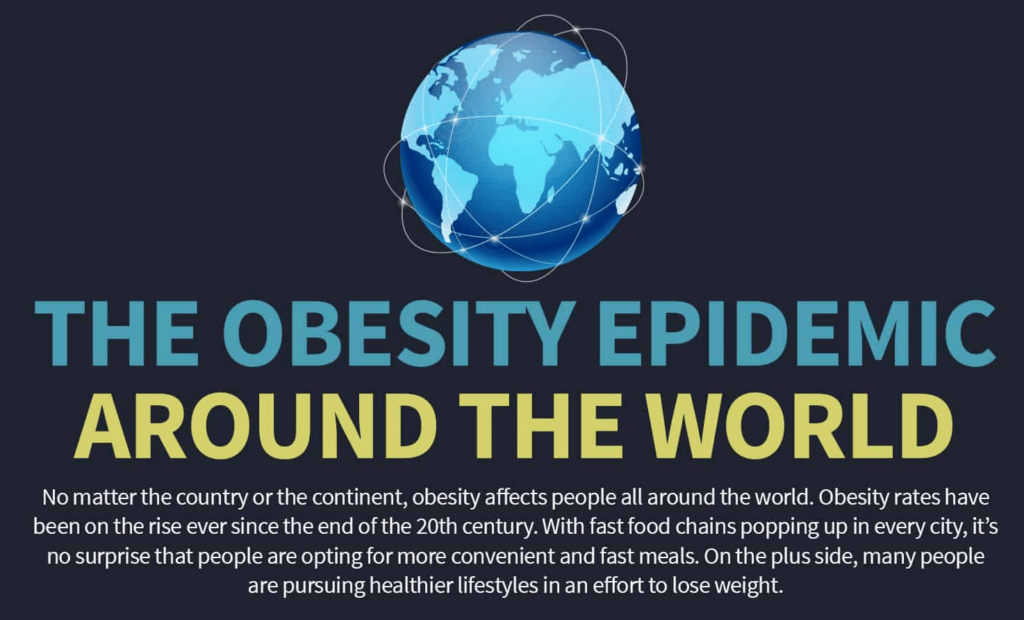 The Obesity Epidemic Around The World

No matter the country or the continent, obesity affects people all around the world. Obesity rates have been on the rise ever since the end of the 20th century. With fast food chains popping up in every city, it’s no surprise that people are opting for more convenient and fast meals. On the plus side, many people are pursuing healthier lifestyles in an effort to lose weight.

Did you know? In the

Center for Disease Control and PreventionFact  More than one in two adults is obese in OCED countries. Organisation for Economic Co-operation and Development

Statistics Show30 percent of the world is now overweight or obese. Fox News

The Bottom LineObesity has almost doubled since 1980.European Association for the Study of Obesity

Reality CheckIn 2011, more than 40 million children under five were overweight.European Association for the Study of Obesity

Did you know?From a global perspective, roughly 10 percent of the world is overweight.Time Magazine

FactThe countries with the largest population of obese children are the United States and China.Forbes

Statistics SayAt 1.2%, Bangladesh has the lowest obesity rate in the world.Forbes

The Bottom LineThe most obese country in the world is Nauru, followed by Cook Islands and Palau. Central Intelligence Agency

The Dangers of Obesity

There’s no doubt that obesity causes severe risks. From increased blood pressure to a higher risk of cancer, obesity increases mortality in the long-run. Unlike some terminal illnesses, obesity is preventable in most cases. Taking the steps to live a healthy life can increase your lifespan. The immediate threats that root from obesity are very real and in most cases, lead to a premature death.

Reality CheckObesity causes over 300,000 premature deaths each year in the United States.Standford Healthcare

FactHigher body fat is directly linked to various types of cancers, including liver and kidney cancer.Cancer.gov

Did you know?Obese Americans, on average, spend $1,429 more in medical expenses than those who are not obese.Medical News Today

Reality CheckThose who are obese are 55% more likely to suffer from depression.Help Guide

FactRoughly 2.8 million adults die each year as a direct result of obesity.European Association for the Study of Obesity

The Data ShowsIn a study of  950 people, the subjects were 60% more likely to develop LV (left ventricular) desfunctions.Cardio Smart

Did You Know?One in three obese Americans have been diagnosed with Arthritis.Arthritis.org

If you’re overweight, the first step to getting healthy is starting a weight loss journey. While the road is long, the pay off is huge. Losing weight takes a combination of eating right, working out, and undergoing bariatric surgery. Surgery, by far, is the most effective way for obese individuals keep weight off in the long-run. After you lose weight, you have to maintain a healthy lifestyle to keep the weight off.

Reality CheckJust a 5% weight loss can lower your cholesterol and triglycerides.WebMD

The Truth isStudies show that weight loss reduces levels of glucose and leptin (both root causes for heart disease and diabetes).National Institue of Health

Did you know?Losing five percent of your body weight can improve your insulin sensitivity.NBC News

The Bottom LineA number of people who lose weight will sleep better by decreasing sleep apena.Shape

Reality CheckA study of 100 women who had weight loss surgery showed that many of them reported increased sexual desire and arousal.Shape

FactResearch found that weight loss may reduce the risk of all-cause mortality.Alive by Nature

The Data ShowsObesity puts a burden on the adrenal gland (the gland that manages allergies), so losing weight helps improve allergies.Everyday Health

Did You Know?“Losing 20 or so pounds might seem daunting, but we’ve shown that even a modest weight loss can yield heart and vascular benefits,”.Dr. De Las Fuentes at the Washington Unversity School of Medicine

Eating right is one of the most important things when it comes to weight loss. It’s important that you meet with a nutritionist to find a diet or meal plan that works best for you. Avoiding “fad” diets that aren’t maintainable long-run is always suggested by professionals. One of the first steps to eating right is to cut out junk food – sugar, sodas, and other processed foods. Eating right isn’t easy and takes a lot of dedication.

FactOf those who go on diets, 95% fail and go regain weight in one to five years.Monte Nido

The Truth isFor a majority of people, dieting does not lead to sustained weight lossUCLA

Sources SayIn the year 2016, 66% of Americans were on a diet of some sort.Women’s Marketing

Did you know?Despite dieting, the number one reasons Americans don’t reach their desired weight is because they don’t exercise enoughCalorie Control

The Bottom Line“The sad fact is that fad diets set the individual up for failure. When the diet fails, the dieters may blame themselves and develop a feeling of demoralization and hopelessness that they are unable to lose weight.”Nutritionist Judy Penta, Everyday Health

Reality CheckOf everyone who goes on a diet to lose weight, up to 35% of them become addicted to dieting.Help Guide

FactDieting is a big factor that leads to eating disorders.Dietitians Association of Australia

The Data Shows45 million Americans go on a diet each year.The Washington Post

Did You Know?Only 21% of adults eat the suggested amount of fruits each day.Kansas State University

Even if you have the pefect diet, it’s still vital to exercise to keep yourself in shape. Studies show that dieting is much more effective in promoting weight loss. When you eat right, you can lose weight much quicker than you would while exercising. Regardless, working out to lose weight never hurts. Not only will you lose some weight, but you’ll develop more muscle mass and keep your heart healthy.

Reality CheckWhile both exercise and dieting are important, dieting is more effective to create a 500 to 700 calorie defecit because physical activity takes much longer.Women’s Health

Fact“As a rule of thumb, weight loss is generally 75 percent diet and 25 percent exercise. An analysis of more than 700 weight loss studies found that people see the biggest short-term results when they eat smart”.Dr. Talbott

The Truth isExperts suggest 225 to 420 minutes of exercise each weak to promote clinical weight loss..National Library of Medicine

Sources SayBy exercising 200 minutes per week or more, you can significantly lose more weight than those who exercise 150 to 199 minutes per week.National Library of Medicine

Did you know?We can only burn between 10 to 30 percent of the weight we gain from food by working out.Vox

The Bottom LineOut of all the members of the National Weight Control Registry, 89% lose weight by a combination of diet and exercise, 10% by just diet, and 1% by just exercise.American Council on Exercise

Reality CheckIt is suggested that you perform aerobic activites three times a week for 20 minutes per session, however, you should do them for more than 20 minutes if you want to lose weight.Healthline

Fact“You don’t need to be an athlete; walking, biking or gym cardio machines all work well. Start slowly and gradually increase to 45 minutes of activity a day, more if you are able.”.Dr. Ann McTiernan, Science Daily

The Data ShowsIf you have bad nutrition, no amount of exercise will help you lose weight.WebMD

Did You Know?“People don’t understand that it is very difficult to exercise enough to lose weight. If that is why you are doing it, you are going to fail”.Professor Todd Miller, Huffpost

Reality CheckAfter bariatric surgery, the rate of mortaility reduces up to 89 percent.American Society for Metabolic and Bariatric Surgery

The Bottom LineAfter patients have bariatric surgery to lose weight, 80% or more “do well” afterwards.WebMD

Fact“Bariatric surgery is probably the most effective intervention we have in health care.”Dr. Twells, NY Times

The Data ShowsMore than 60% of patients see a decrease in cholesterol levels.US News

Did You Know?50% of bariatric patients saw a decrease in high blood pressure.US News

It’s no surprise that it’s expensive to be obese. From higher food costs to medical expenses, those who are obese will spend several thousands more over their lifetime. Weight loss will not only help your health, but it will also help you save money in the long-run.

Reality CheckAn obese vs. a normal weight 20 year-old will save $14,059 over his or her lifetime.Obesity Society

The Truth is “If you split all your dinners and eat 183 total meals annually, instead of 365, assuming that the cost is $5 per meal, that’s a savings of (about) $910,”Professor O’Neil, Bankrate

Sources SayAt the age of 50, the average obese will have incured $36,278 in expenses directly related to their weight.NY Daily News

Did you know?In the workplace, obesity cost American companies $3.38 billion in productivity costs each year.Center for Disease Control and Prevention

There is a direct link between weight and mental health. It’s proven that of people with mental health issues, more of them are overweight. Weight loss will improve both your physical and your mental health. From being more confident to lifting out of a depression, weight loss does wonders.

The Truth isKids with obesity face a higher risk of depression during adulthood.CBS News

Did you know?About 80% of people with mental health problems are obese.Centers for Disease Control and Prevention

FactOver one third of obese men and women in treatment for weight loss have a mental health issue with binge eating.MentalHealth.net

The Data Shows“Overweight and obesity are epidemic among persons with serious mental illness, yet weight-loss trials systematically exclude this vulnerable population.”Modern Medicine Network

Did You Know?“I really, strongly believe that people need to start dealing with whatever issues in their life they’re not happy with and the weight issues will be easier to deal with after that.”Promedica Health Connect